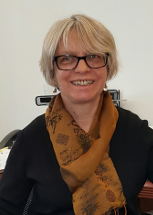 For more than twenty-five years, Risa Gerson has represented indigent criminal defendants challenging their convictions. Prior to joining the Office of Indigent Legal Services, Risa was the Director of the Reinvestigation Project at the Office of the Appellate Defender (OAD), a holistic client-centered appellate office in New York City. Risa came to OAD in 1996 as a supervising attorney, and was named the Director of Special Litigation in 2003. In 2009, she was named the Director of the Reinvestigation Project, which litigates post-conviction claims of innocence.

In addition to practicing law, Risa was an Adjunct Professor of Clinical Law at New York University School of Law from 2010 through 2012, where she taught the Criminal Appellate Defender Clinic. She is a long-time member of the New York City Bar Association, and currently serves as the Chair of the Criminal Justice Operations Committee
.