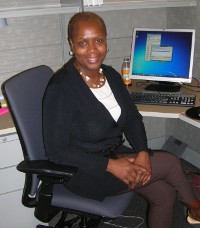 Angela Olivia Burton received her B.S. from Cornell University’s School of Industrial and Labor Relations in 1981, and her J.D. from New York University School of Law in 1991.

She started her legal career while still in law school, representing children in New York City Family Court as a student attorney in NYU Law’s Juvenile Rights Clinic. Upon graduation, she clerked at the New York State Court of Appeals with the Hon. Fritz W. Alexander II from 1991-1992. She was an associate at the law firm of Debevoise and Plimpton from 1992-1995, and an Instructor of Law at New York University School of Law from 1995-1998. She joined the faculty at Syracuse University College of Law in 1998 as the Director of the Children’s Rights and Family Law Clinic. Since 2003, she has been an Associate Professor at the City University of New York (CUNY) School of Law, teaching courses on lawyering practice, family law, children’s rights, and the child welfare system.

She has published and presented on a range of topics, including the application of multiple intelligences theory in clinical legal education, the status of New York State’s compliance with the Optional Protocol on the Sale of Children, Child Prostitution and Child Pornography, and a book chapter on the life of Judge Fritz W. Alexander II. Her latest publication, "They Use It Like Candy: How the Prescription of Psychotropic Drugs to State-Involved Children Violates International Law" was published in the Spring 2010 issue of the Brooklyn Journal of International Law.

Angela has long been involved in efforts to enhance access to justice. In 1995 she authored the Manhattan Criminal Arraignment Study: Final Report for the Vera Institute of Justice, which assessed and made recommendations for improvements in the criminal court arraignment process in Manhattan, and has organized and participated in numerous panels and conferences addressing such topics as the role of law schools in developing and assessing alternative service delivery models, the roles, responsibilities, and future of family court, and the legal and social impact of racial disproportionality in child welfare cases. She currently serves as a Commissioner on the New York State Permanent Judicial Commission on Justice for Children, and is a member of the National Association of Counsel for Children.