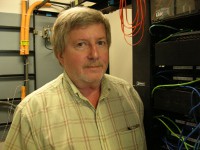 Peter has spent most of his career at the intersection of computer technology and legal practice. He studied computer science at Michigan State University (1976-77), and graduated from Thomas M. Cooley Law School (1981). He engaged in private practice in both Michigan and New York, then in 1984 joined Prisoners' Legal Services of NY where he both represented persons incarcerated in NY Department of Correctional Services facilities, and led the first office automation projects for PLS' six statewide offices. In 1987 he began work with the former US Immigration and Naturalization Service, Office of General Counsel, where he first practiced immigration law, including the review of Visa petitions and the first Employer Sanctions cases, and then led the implementation of the first nationwide computer network linking all INS legal offices.

More recently, Peter was the IT Director for the NYS Capital Defender Office, from its beginning in 1995 until it disbanded in 2006 following its successful appeal in People v Lavalle, in which the NY Court of Appeals struck down a critical portion of the NY death penalty statute. Peter has also worked with various other NYS agencies including the Departments of Civil Service, Correctional Services, and Transportation, and the Office For People With Developmental Disabilities, in the information technology, project management and information security areas.